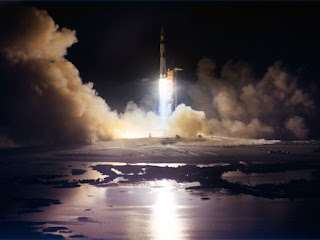 Not since Prometheus have men dared so much to gain the fire of the gods. It seems fittingly appropriate therefore that mans first true golden age shall be ushered in amid the glare of heaven, the harnesses power of the stars themselves.

Fusion, the inexhaustive pollution-free and almost costless energy that lights the sun and stars across the night, is on the eve of being tapped for civilization and societies in dire need.
Imagine power plants the size of coffee pots – no belching stacks, unsightly wires, no blackouts due to snow or over usage, no worries about radiation, no strip mining scars, no more pollution over cities due to power generation, and no more pollutants due to auto exhaust emissions, as fusion engines operating with but one gram of fuel could take a car from coast to coast ten times over – some 30,000 miles – for less than fifty cents, the cost of fusion fuel.

Imagine the nearly perfect recycler. Old cans, bottles, bags, cars, and sundry trash would vanish into one end. Out of the other, good new supplies of raw materials would flow. This is possible within a future now foreseen and it will happen sooner than you think.
Consider: with power from the stars (as efficient compared with present fossil fuels as gasoline to matches) what is to prevent man from attaining his age-old dream, and reaching out to touch the stars themselves?

Consider vast and stately liners carrying a thousand people from Earth to the Moon, from Mars to sites amid the glories of the rings of Saturn. Such a ship, direct descendant of our ship, the S. S. Statendam, will fly within our lifetimes, and many present here will see sight s never seen before. These vessels are preclusive to the grandest ships of all, descendants which will, ultimately, carry 10,000 year traditions on the widest sea of all, the waiting sea of stars.

Participants in discussions for the Fourth Seminar include:

As I post these extraordinary seminars I am struck by the nagging question "why did this not happen?" These topics were introduced as valid options half a century ago. Why are we still debating the energy question? Why are we plagued with fears of energy shortages, pollution, and an over crowded planet?

The only answer is that we got in our own way. The science was there decades ago. Who is blockading this progress? I am reminded of a blockade that happened on the Mediterranean for 1200 years. No tin was allowed to flow through the world. Why not? Are we being prevented from space technology for the same reasons? By the same people? If not, who? AND FOR WHAT?

I hope that these posts are a catalyst for thought. Think hard. Then ask yourself, what can you do? Or, perhaps more to the point, what can you not do. Don't believe everything you are told by the experts, the media, or the population. Read and question. Think. Compare. Then think some more. I know, hard work. But staying here will be hard when a comet is on its way, or the weather becomes an ice age, or there are too many people.

The next generation has the opportunity to expand our reach into the endless real estate of space. Industry will boom. New markets will be created. Prosperity is possible.  All because some among us would like to explore the ocean of stars we have pondered for at least 75 thousand years. Let's help them do it. - Michelle