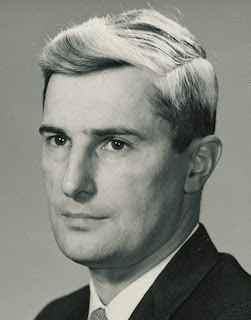 Published in the Annals of the New York Academy of Sciences 140, article 1, December 1966.

Dandridge M. Cole was born on February 19, 1921, in Sandusky, Ohio. He died on October 29, 1965, as a result of a heart attack, less than a week before he was to deliver one of the papers published in this volume. He graduated from Princeton University with the class of 1943 and secured his Master’s degree at the University of Pennsylvania in 1949.

He lived most of his life in Bryn Athyn, a suburb of Philadelphia, and leaves a wife and six children. He wrote poetry and children’s songs and was active in athletics. Between 1945 and 1953, he taught at the Academy of New Church, Phillips Exeter Academy, and the University of Pennsylvania. From 1953 to 1960 he worked for the Martin Company in Baltimore and Denver, after which he completed five years of service with the General Electric Company’s Missile and Space Division at Valley Forge, PA.

Dan Cole established an enviable record for himself as a long-range planner and thinker, with a reputation in and beyond the United States. Fortune Magazine, in August of 1964, in an article entitled “The Wild Birds find a Corporate Roost,” described Dan Cole as part of a select group of advance thinkers in industry who have "taken a leaf from Leonardo da Vinci.”
Dan’s many-faceted abilities are shown also by his having been selected by the American Broadcasting Company for a leading role in their national network documentary called “The Way Out Men.”

The British author Arthur C. Clarke believes that most people trying to predict future technical developments are afflicted with either "failure of imagination” or "failure of nerve." Dan had plenty of both: imagination and nerve. In his thoughts he was bold, and without fear to think the unthinkable. In his deeds he was gentle and considerate and never critical of others.

Dan was offered a chance to appear in a series of national advertisements sponsored by a tobacco company extolling the virtues of a well-known cigarette. Despite the large fee, in four figures, and the national exposure, Dan quietly and without fanfare declined, because he did not want to encourage anyone, particularly youths, to start or continue smoking.

Dan was a deeply religious man and said in his book, Beyond Tomorrow, “While no one can say what the future will hold, there are indications that the next fifty years will see the emergence of a new religion with beliefs consistent with the established principles of science. Thus, religion will be affected by the new discoveries regarding behavior and group interactions. It should also profit from the new realization of both scientist and theologian that neither alone has the key to knowledge and happiness, and from the new maturity of mankind.”

His philosophy was perhaps best expressed in the foreword of this book, where he wrote, “While the future holds great stress and threat as well as great challenges, we also see basis for expectations of the growth of man to a state of greater wisdom, greater accomplishment, and greater happiness in the wonderful world beyond tomorrow.”

As a strong individualist, he did not hesitate to speak out on matters he considered important. He might be called on of those of whom Thoreau spoke in his book Walden: “If man does not keep pace with his companions perhaps it is because he hears a different drummer. Let him step to the music which he hears, however measured and far away.”

Dan did hear a different drummer. His main contribution was that he caused us to stretch our imagination, caused us to take issue with the increasing rate of change that we are forcing upon ourselves, all too often without much thought as to where we are heading, and he made us realize that the greater the rate of change, the greater the penalty for not thinking boldly enough.

For some time he had been studying artificial hearts and other body organs, which led him to think that by the twenty-first century it should be possible to remove all of the major organs of the abdomen and thorax and replace them with superior artificial components. He even pictured man with all parts of the body, except the brain, replaced by mechanical substitutes.

The asteroids were his favorite subject. He pointed out how slight a change in velocity could cause close-approach asteroids to strike the earth with tremendously destructive effects. For instance, the Arizona meteor crater was formed by a meteor perhaps only 300 feet in diameter, but its explosive energy has been estimated to have been in the order of 30 megatons – comparable with one of the largest bombs known today. The South African meteor, with a diameter of approximately one mile, delivered an equivalent of more than 1,000,000 megatons. He was deeply hurt when, as a result of bringing this to the attention of the public, he was accused of promoting super-bombs. All he had done was to bring a thought to a logical, if unpleasant, conclusion.

He also pointed out that close-approach asteroids are the easiest extraterrestrial targets for soft landing in terms of velocity requirements. Because of the extremely low gravitational fields and escape velocities of these asteroids, the landing problem is reduced to a space rendezvous and docking maneuver. The only reason why the moon will be visited sooner is that the travel time is so much shorter. He showed that, with the present SATURN technology, a manned landing on a close-approach asteroid is a distinct possibility  by mid-1970.

And again Dan thought the unthinkable: Why not capture an asteroid into earth orbit? He showed that for asteroids with favorable orbits the effort to do this would not be at all out of reason, particularly if other planets were used to help make the necessary orbit changes. This possibility was also suggested in a speech by Lyndon B. Johnson in Seattle in 1962.

According to all we know about our solar system and the law of probabilities, a considerable number of asteroids with suitable orbits and suitable sizes must exist. In recent years new asteroids have been discovered and old ones rediscovered, largely by accident. It is surely in some measure a result of Dandridge M. Cole’s work that a systematic search for asteroids has now been undertaken. When a suitable one is found, it would be most fitting that it be named after him.

Posted by The Symbologist at Saturday, August 05, 2017