It is possible – indeed technically quite simple to accelerate particles such as electrons, protons, and heavier nuclei to great velocities, easily to the 100 McV (100 Mc v/c2 ) and even GcV (+1,000,000,000,000 electron volt) levels. In such beams, rest masses of particles increase

where p=〖(m〗_0/√(1-v^(2 )/c^2 ))*v
relative to the inertial continuum are enormous. Such beams charged (±) may be neutralized to eliminate charge (Coulomb) build-up on a vehicle

Even in the 1950s – 1970s the momentum of beams in the worlds larger accelerators were on the order of a 500 pound artillery shell moving at about 2-5 miles a second; while the rest masses of the beams were tiny fractions of grams.

I have always felt that while such beams could end once and for all the missile threat to all and any countries, that the true application of such beams should be for propulsion of space ships – both within the solar system and on interstellar voyages. Such beams – the Echo Lance – reduce the mass ratios needed for interstellar flight by at least 50, easily 200, and theoretically better than 1000. So 14,000,000 tons of fuel could be reduced to between 140,000 and 10,000 tons.

Perhaps surprisingly fusion-fission, or fusion cycles are not needed to drive such ships. Consider: a 1,000 MWE (one thousand million watts electric output) can be gained from a fission reactor by burning perhaps 35 tons of fissile metal a year (ideally in breader reactors).

The  Echo Lance is, in a sense, a transformer operating upon the inertial action/reaction of space itself.

We could have built star ships using such beams in the 1950s and launched them in the 1960s. Unfortunately all such work was stopped circa 1960, with the statement that never anywhere should it be revived or even mentioned lest the imaginations of the public be flared to the point where they would demand its construction.

An unusual name. Why? Because it’s thermo-nuclear combustion chamber operates in two inertial systems at the same time. The ship and its payload in one. The thermo-nuclear pulses “outside” in normal inertial space. 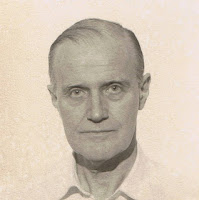 Posted by The Symbologist at Monday, March 06, 2017 No comments: